I am now permanently extending my fundraising efforts and announcing my partnership to support the fight against Childhood Cancer with Claire’s Army. I will be donating 10% of the proceeds of every portraiture booking taken and donating the funds to Claire’s Army.

2019 was the year that I started working with the idea of using my unique photography to support the fight against Childhood Cancer, specifically Diffuse Intrinsic Pontine Glioma (DIPG). I had never attempted anything like fundraising, nevermind the tour of events to promote the work. I will not deny it was hugely challenging to autonomously secure sponsorships, television appearances, press opportunities, and venues across the Charlotte area to host the events.

In the end, despite the battle to endorse and support The Isabella Santos Foundation, I was still immensely proud to have made any difference in the fight against childhood cancer. I raised a total of $3,000.00. I awarded ISF $2,000 and gifted $1,000 to Lynn, and Thomas Barron of Indian Land, SC, whose three-year-old daughter Mackenzie had been diagnosed with DIPG.

Here we were in 2020. As we all renew living in a disarray universe, I started to deliberate over which Childhood Cancer organizations to support. Unlike last year I wanted an organization to be still local to the Charlotte, NC area and to be focused on backing an organization that’s efforts directly assist families.

In 2020 I supported Claire’s Army, who serve families, love kids, and fight Cancer. Their mission is to empower parents by eliminating daily stresses that can distract them from the precious moments they have with their sick child. 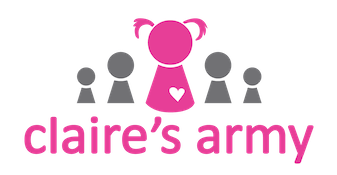 Claire’s Army started long before Claire was diagnosed with Cancer, Claire’s Army started on August 30, 2009, the day she was born. Claire was born to Emily and Kevin Ratliff into a loving Christian family. Emily and Kevin both grew up in and around Charlotte, NC. They were very active in their schools, sports, church, and neighborhood. Through these activities, each had developed their own close network of friends and family that doubled once they were married. Claire was immediately adopted into this network or Army, the day she was born.

Approximately 200 new families will face a childhood cancer diagnosis every year in Charlotte, NC. 75+ families have been fighting Cancer for over 18 months. Claire’s Army makes a massive difference in the community. They provide each family with a Claire Package, delivering custom-ordered dinners five nights a week, paying bills on behalf of families suffering financially.

I am permanently extending my fundraising efforts and announcing my partnership to support the fight against Childhood Cancer with Claire’s Army. I will be donating 10% of the proceeds of every portraiture booking.

Without you, my customers, it would be impossible to help raise funds for Claire’s Army. However, more importantly, please spread the word and good news; and tell all your friends and family about the new studio at the Old Collins Mule Barn in Waxhaw. NC and of course all the exciting fundraising events coming up over the coming months, check them out below.